tradeshows and exhibitions: why & how

This week a handful of small business owners talk about their experiences of exhibiting at trade shows and other exhibitions, why they market their businesses through these kinds of channels and what they do to get the most of their investment in them.

Chris Cullen has been back from his trip to New York for a few weeks now - but it's not the tourist sights he's still buzzing about.

The founder of food manufacturing company Culley's, which specialises in hot sauces, was invited to be among the 50 vendors taking part in the New York Hot Sauce Expo, which ran in late April.

During the expo the company made direct sales to six retailers, and is now in early talks with the largest distributor of such products on the East Coast of US, as well as Bed Bath and Beyond - which is growing a gourmet food side to its business - as a result of connections made at the event.

"If we had literally done a quarter of the business that we actually did there, we would have been rapt," says Cullen. "It was a substantial investment for us to be part of that event, but it was worth every penny."

This week I've interviewed a handful of small business owners about their experiences of exhibiting at trade shows and other exhibitions, finding out why they market their businesses through these kinds of channels and what they do to get the most of their investment in them.

Culley's has taken part in a number of shows in the four years it's been in operation - primarily business-to-consumer events, but with a growing focus on business-to-business shows as it explores offshore opportunities.

"I think it's hugely important to expose your brand to the public, tell them your story and get them to try the product. With those shows you can expose a lot of people to your product in a short amount of time," he says.

"It's also a great way for us to scope out opportunities for additional channels to market, and a way to meet retailers, retail buyers and distributors."

John Drew is the founder of Blue Coconut Distribution, which produces the Blue Coconut brand of coconut oil, and similarly says exhibiting at shows provides an important opportunity for the relatively young business to get in front of consumers.

"Our product is relatively new, so we've needed to do a lot of education around it. The subject of edible oils and saturated fats is quite complex, and it's an area where there's still quite a lot of conjecture, so we wanted to get in front of people to understand in an intimate way their concerns and confusions," Drew says.

"Obviously when you're selling through supermarkets, as we do, it's difficult to get a handle on what people are saying so exhibiting at shows enables us to get in front of real people and listen."

Drew says his company has primarily adopted a "bums-on-seats philosophy" when assessing which shows they'll take part in; exhibiting at big events like The Food Show in Auckland, Wellington and Christchurch consistently over the past four years has been the company's major investment in the area. However, it's also invested in exhibiting at smaller shows focused on niche audiences - such as gluten-free and vegetarian shows - "which I think can be equally effective in terms of return on investment", he says.

The business owners interviewed also emphasised the importance of good planning to get the most out of being an exhibitor. Cullen says they spent six months planning a strategy that would get them the most impact at the New York event, and Drew says things like studying the floor plan and your place in it, as well as formulating backup plans for scenarios such as running out of stock are essential.

Bernadette Casey is creative director of The Formary, a Wellington-based firm that develops sustainable textiles, which is currently exhibiting as part of the World Exposition 2015 in Milan.

She agrees the ground work laid before going to a show is crucial.

"For high profile events we leverage the opportunity to build our brand awareness through a combination of PR, social media campaigns and invitations to attend the event," she says.

"Connecting with people before the event is important. Trade shows and exhibitions are great meeting points, especially when your customers or potential partners are located in different cities and countries. Inviting people who are important to your business to attend, and meeting with as many people as possible during the event I think is key."

Brent Spillane is managing director of XPO Exhibitions, which runs business-to-business trade shows, and shares a number of pieces of advice with Your Business about things exhibitors can do to prepare for a show, as well as during and after the event.

Among his tips for getting maximum impact while at an event is to de-clutter stands, hold motivational sales meetings with staff at the beginning of each day, focus on the quality of leads rather than volume, and - importantly - be yourself.

"Bring your personality with you and take some pride in what you're offering," he says. "Build rapport with each visitor so, if you can, match your solution to their problems. You've got to come across in a positive way, and if you create the impression your business is trading strongly then that's half the battle won."

Chris Cullen is the founder of food manufacturing company Culley's, which specialises in hot sauce and was recently a vendor at the New York Hot Sauce Expo. The Auckland-based company has been going for four years and is about to hire its fifth staff member.

How did the opportunity come about to show your product in New York?

That's an invitation-only event, and there were only 50 vendors there so it's an exclusive show. I went as a spectator last year and met the promoter, Steve Seabury from High River Sauces. He loved the product and what we were doing so he extended the invitation to us.

What connections did you make through that experience?

If we had literally done a quarter of the business that we actually did there, we would have been rapt. We sold a lot of product on the ground; we had six retailers who took product from the show.

But in the US product is mainly sold through distributors - rather than directly to retailers - and from meetings at that show we're now in early talks with the largest distributor of these kinds of products on the East Coast of US, and Bed Bath and Beyond, which is growing a gourmet foods aspect to their business. It was a substantial investment for us to be part of that event, but it was worth every penny.

More generally, why have you chosen to market your business through shows and exhibitions?

Quite a lot of our marketing budget goes towards exhibiting at shows. For us it's about building relationships with complementary brands, and the opportunity to connect with end consumers. I think it's hugely important to expose your brand to the public, tell them your story and get them to try the product. With those shows you can expose a lot of people to your product in a short amount of time.

It's also a great way for us to scope out opportunities for additional channels to market, and a way to meet retailers, retail buyers and distributors.

So what's your mix in terms of exhibiting at business-to-consumer shows, versus ones focused on selling business to business?

We do a lot of business-to-consumer shows, but we are looking at more business-to-business opportunities. We're looking to do the Fine Food Australia show in Sydney, which is a B2B event. In New Zealand a lot of our business is done directly with retailers, but in Australia the model is different - and more like it is in the US - where business is done mainly via distributors. So opportunities like that are about connecting with those partners and engaging with them.

What key factors do you consider when deciding which events to exhibit at?

Firstly we look at numbers and statistics. Organisers will break down their attendee statistics into things like how many buyers there are from different sectors, the number of decision makers who will actually sign a purchase order, and how much business is done dollarwise at the show.

Generally we would have also been to any show we exhibit at beforehand. I've been a foodie all my life, so I've been to most of these shows as a spectator and in the industry we all talk about which events have worked for us. You do get a gut feel about which are the good promoters.

How do you get the most out of exhibiting at an event?

You have to plan well in advance; we planned for New York for six months beforehand. We consider what our story will be for any particular show given the demographic attending and then we'll create something striking that's going to draw people in. In New York we were competing with 50 other hot sauce vendors, so it can be very competitive.

Being friendly is another key, and as the owner I'm always on the stand. It's fun for me and I love the thrill of being involved in events.

What about after an event? What do you do then?

I follow up with any leads straight away. I don't sleep for more than one night without following up with either a phone call or an email. You have to keep that momentum going; there's nothing worse than leaving following up too long because people will forget.

What's your advice for others wanting to get the most out of exhibiting at a show?

• Have a plan. You need to give people a reason to want to know more about you, to try what you have on offer, and be part of what's happening on your stand. We've done all kinds of things - like chilli eating competitions - to draw people in.

• Make the most of the supporting marketing offered by the show. It can be pricey, but it does pay dividends. Sometimes they'll offer spaces at cooking demonstrations, or refrigerators at the entrance for product, or their social media campaigns can create quite a lot of activity leading up to an event.

• Talk to your own audience. When we went to New York we took our followers on the journey through posts on Facebook. We were targeting the US market, but it was also an opportunity to talk to our tribe at home. 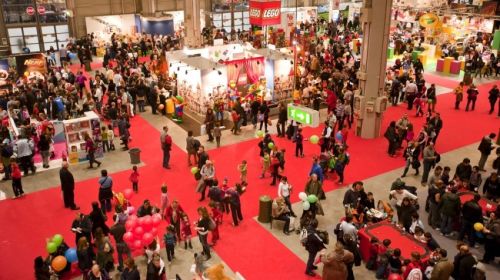